How to Get Your Nice-Cannes Airport Transfer for 1.50€!

Most festivalgoers coming to Cannes by air will arrive at Nice-Cote d'Azur International (NCE). Cannes itself is about 25km from the airport so inevitably, a transfer is required.

The default option for those who aren't prepared to shell out for a taxi or a helicopter is the express bus, number 210, operated by Lignes d'Azur. The express bus leaves from the bus station at Terminal 2 and mainly follows the A8 autoroute (freeway) to Cannes. The transit time is a relatively speedy 50 minutes, but at around 33€ for a return ticket, it isn't exactly cheap.

If you are not in a major rush to get to Cannes, you can save yourself quite a bit of cash by taking the local bus instead. The journey time is about one hour, fifteen minutes (traffic dependent), so there isn't that much in it when compared to the express. But the real magic comes in the price. A one-way ticket is only 1.50€! Yep, you'll save 30€ taking the local bus instead.

The local bus is Lignes d'Azur No. 200. The 200 leaves from a stop called "Aéroport Promenade". This is actually located outside the airport, but it's only about a 3-minute walk from Terminal 1: 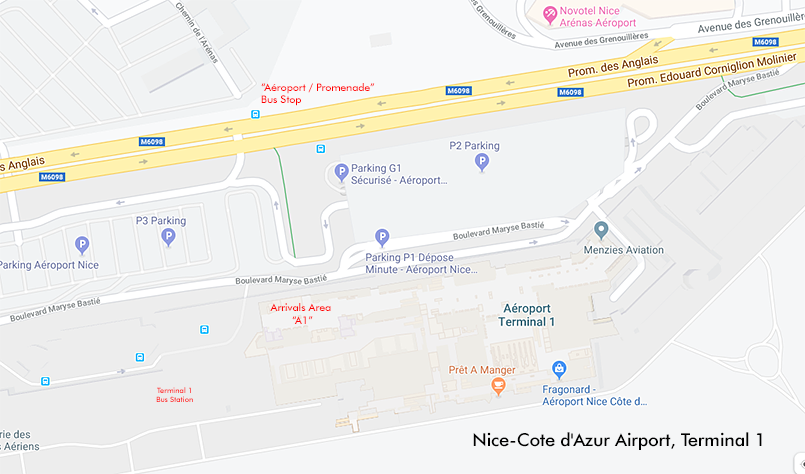 If your flight already arrives at Terminal 1, clear immigration, collect your bags and clear customs, then follow the signs for the Terminal 1 bus station.

If you arrive at Terminal 2, you can get the tram which will take you to Terminal 1 in about 5 minutes (the tram is free between airport terminals). The tram station at Terminal 1 is also right next to the bus station.

From there, the directions are:

The correct bus will say "Cannes 200" on the front. You can buy tickets on board, but it's cash-only. Most drivers will not change large notes so make sure you get coins at the airport first.

The bus will give you a little tour of the 'real' French Riviera between Nice and Cannes, before dropping you off outside the Hotel de Ville (town hall) in Cannes (although in some years, the bus has been diverted to drop off passengers at the train station).

On your return, simply pick up the 200 from the same place you were dropped off - it will say "Nice 200" on the front. Once onboard, make sure you listen out for the "Aeroporte Promenade" stop announcement - you don't want to ride the bus all the way to Nice.

Aside from the fantastic price, the 200 is also a good choice if you're travelling either very early or after 7pm (as the express only operates 8am - 7pm). After 9pm, the 200 becomes the N200 Noctambus (night bus) and runs well into the wee hours (albeit, infrequently). As an added bonus, the N200 also stops at the airport bus station (T1, stop 3).

It's also worth noting that the price for the 200/N200 includes carriage of one bag free per person. An additional 1€ may be levied per bag after the first, and oversize bags can be 5ï¿½ each.